My fitness journey has been a long process of slowly finding my way to healthy habits. I grew up as an extremely picky eater with poor habits. After trying half a dozen different forms of caloric deficit diets (vegan “dieting”, Weight Watchers, extreme low fat/protein diets…) I kept yo-yo’ing up and up to my highest weight around 320lbs.

I finally woke up and realized that I needed to make real lifestyle changes. I slowly learned what would work for me, seeing small improvements each time. Cut out fast food, lose 15lbs. Cut daily soda and candy, lose another 15lbs. I was finally feeling better, and felt motivated to start making much larger changes. I moved on to “slow carb” (paleo + legumes with a cheat day), and lost another 50lbs in a few months. And then, I got stuck. I spent over a year floating around 230lbs.

After some major frustration, and feeling myself slipping on my eating habits, I realized that I needed more than just dietary change to reach my goals. Some amazing friends told me “Hey! Why don’t you come try out CrossFit!” I figured, well, it doesn’t hurt to give it a try and signed up for the 5 week prep class (February 2013), promising myself that I wouldn’t miss a class, and decide at the end if I liked it.

As Kevin and Joanna probably remember, my first class left me barely able to walk out the door – and I was determined that I would come back to make sure I never felt THAT exhausted again after only a workout of bodyweight movements (yay burpees!)

Since then, I’ve lost 25lbs (while seeing significant muscle gain), constantly increased my lifts, and gone from being unable to run 400m unbroken to running 5k at Legs for Literacy in 30:49! I feel better than ever, and I know that I’m improving every time I step through the door at CFM!

*May increase in weight
**Post all loads to comments 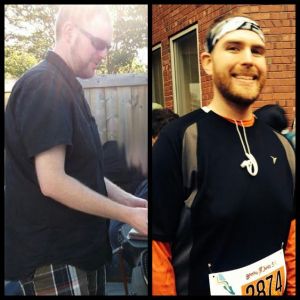